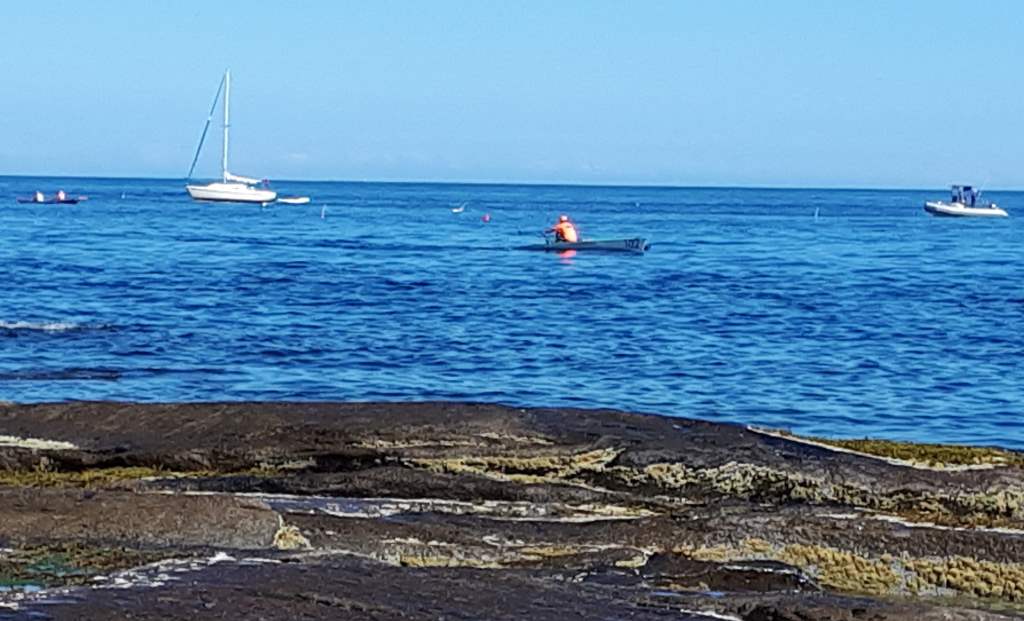 Two members of OAR made their way to the coast of Massachusetts for the Blackburn Challenge – a 32 km race around Cape Ann which is contested by almost every human-powered watercraft imaginable.  The Blackburn has been run for the past 33 years with this year’s event held on July 13.  John Easton entered the FISA-Coastal Singles class in his Eurodiffusions Yole 18 and Peter Jepson rowed in the Sliding Seat Singles: Touring class in his home-made craft.  The organization of the event was excellent, as usual: everything went like clockwork.  The conditions at the start were perfect for rowing and fishing, but there was no doubt that it was going to get hot, and the tranquil water of the Annisquam River did little to ease the anxiety about the uncertain water conditions out at sea.

John reports: I executed a splendid racing start and after 20 strokes was neck and neck with the other 8 competitors; however that was the last I would see of them as I settled into my 32 k pace of 9 kph.  The 4 km of river was smooth rowing, but progress was slowed by the incoming tide and by the numerous boats moored in the deep water close to the axis of the river channel.  The first section of open water was a pretty much straight shot down the north west coast of Cape Ann, which sheltered rowers and paddlers from the 2-m swell coming from the south east.  The first bit of choppy water came from reflecting swells off the granite headland at Halibut Point State Park and heading to the southeast.   The combination of the long wavelength swell, the reflecting waves, and lobster boat wakes made for tricky navigating.  A sad-sack pair experienced this turbulent water as they flipped their double Fenn surf ski and made a few unsuccessful attempts to remount.

There were interesting hazards at Cape Ann.  The lobster trap buoys were a particular bother.  Most of the buoys are Styrofoam with slender plastic pole-extensions, but some have balls on the top that would get stuck between the rigger and the boat and bring you to an abrupt stop.  Three of them caught me!  The warm waters of the Gulf Stream come close to shore at Cape Ann and the area is reputed to be habitat of Great White sharks: it is therefore advisable to stay in the boat.  The hot moist weather was brutal and in my case resulted in a nasty bunch of blisters.  Professional and sport fishermen in their power boats seemed genuinely unaware of, or maybe just disinterested in, the human powered craft and were completely unaware of their immense wakes.  Mostly the forward facing boats left last, however SUP and hand paddled paddleboards (yes some did that for 32 km!) had some close calls when overtaken.

I went on to finish in 3h40, which was 22 minutes slower than 2018, but considering less training, poorer water conditions, and really sore hands the 2019 result was OK.  Next year maybe I’ll get on the water sooner!

Peter reports: I watched John start his race, because the Coastal singles started 5 minutes before the Touring singles: but I didn’t see him again!  I executed my race plan pretty well – ‘start at the back of the pack and fall steadily behind’ – but after 5 minutes it was clear that the class was divided into two groups, and I was at the back of the leading group, which consisted of 5: two boats went ahead quickly, then there were three, Mr. Orange-shirt, Mr. Green-shirt and me, rowing together.  Gradually, Mr. Green pulled ahead, then Mr. Orange did the same.  I was rowing well at a good pace (for me), though, and didn’t want to burn up too early.  As I emerged from the river into the open sea, a swarm of paddled boats – the fastest were the outrigger doubles – started to overtake, but I was overtaking other earlier starters – paddle-boards, and dories – myself.

Since the people in paddled boats face forward, and those in rowing boats face aft, there is an opportunity for conversation as they catch up.  I was chatting with one guy in an outrigger single, when he caught a crab, or whatever it is paddlers catch, and capsized!  He was soon up and going again, and 15 minutes later he caught up again.  I was chaffing him about stopping for a swim, and how cooling it must have been, when he caught another crab and capsized again!  The third time he caught up, I didn’t catch his eye or say a word.

After about an hour, I caught up with Mr. Orange and gradually built up a lead on him.  I also executed the other half of my race plan, to stop for a drink – Gatorade, which contains electrolytes, is much better than water during a long row – every 30 minutes.  But it was getting hot: the sun was beating down!  After an hour and a half, I realized I was getting tired much more quickly than expected, and my thoughts changed from catching Mr. Green and keeping ahead of Mr. Orange, to finishing the race: I was not yet half-way!  I deliberately slowed down about the two-hour mark, and soon Mr. Orange passed me again, and gradually pulled ahead, not to be seen again, except as an orange spot in my mirror, until we shook hands on the beach.  The dehydration was far greater than expected: after a couple of hours, the interval between drinks was dropped to 20 minutes.  Even so, I got some cramps in my legs as I rowed, and at one point in one hand too, so I couldn’t let go of the oar handle!  Still, not so bad: the reason Howard Blackburn couldn’t let go of his oars was frostbite.  As usual, the water got rougher the farther round Cape Ann we went: the long swells are not a problem – though it can be disconcerting when not only the boat, but also the head, of somebody near you disappears, as the crest of a swell comes between you – but the shorter, lumpy waves were annoying.  Argh!  . . . One stroke at a time . . .

Keeping on keeping on, I got to the lighthouse near the entrance to Gloucester harbour, and knew there was only half-an-hour to go.  At my last stop, I finished the last of the four 600 ml. Gatorade bottles I had with me.  And finally to the finish line and the beach.  It was disappointing not to have been able to row strongly all the way round, but on the positive side I finished – for the first time ever – in the top half of the class, and my time, 3h44, was only 3 minutes slower than in 2017.  In the couple of hours after the finish, I drank another 5 bottles of Gatorade!