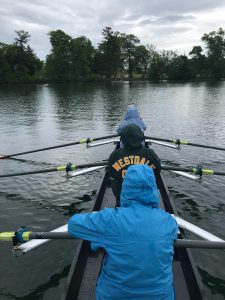 This Ontario Adventure Rowing (OAR) tour was unique in several ways.  It was the first ever organized by the Orillia Rowing Club (ORC); it was the first held on the famous Lake Couchiching; and it was the first memorial tour.  So, on June 15 when Norma and I arrived at ORC, in the beautiful setting of J.B.Tudhope Park on Lake Couchiching, we had high expectations and we were not disappointed.  The ORC organizers were enthusiastic and undeterred by the rainy conditions. The high winds that had roiled the waters on the previous day had subsided and the tour was on.  Before launching one of the organizers, Jane, gave a summary of the Gaudaur family which has a 200 year history in the area including a champion rower. Participants were given passes to view an exposition of the Gaudaur family at the Orillia Museum of Art & History. 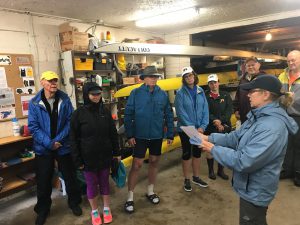 ORC provided two quads and OAR brought in two additional quads to accommodate the 18 rowers.  Three rowers and a cox were assigned to two of the quads. With the company of a safety boat the flotilla moved out of the bay where ORC is located and headed northward. Jane provided us with a running commentary on the various landmarks along the way while steering us around rocky outcrops and islands in the mostly shallow lake.  The sky was overcast but patches of blue on the horizon looked promising. Our destination was Washago Park at the north end of the lake and we arrived there after about 2.5 hours of steady rowing. Under a park shelter the organizers had already laid out an array of food and beverages to suit all tastes. 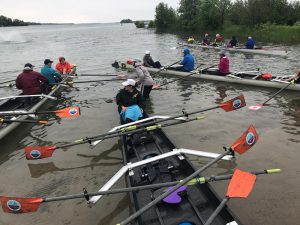 By the time that we were refreshed and ready for the return journey, the promising blue had disappeared, rain began and a wind arose from the south/southeast bringing choppy conditions.  At one point a flock of cormorants were standing stoically on a rocky reef which we may not have seen without their presence. Strong and steady rowing was required to keep the boats on course and to avoid water coming over the gunwales.  We were reassured by the presence of the safety boat. We cheered the return to the calm waters of the bay at Tudhope Park, having rowed just over 32 km.

We enjoy rowing for several reasons: the camaraderie among rowers; the opportunity to see parts of this great country from a different perspective and for the physical benefits.  All of these were satisfied with this well-organized tour, plus we learned some history of the Gaudaur family. Kudos to the ORC organizers and the OAR support. 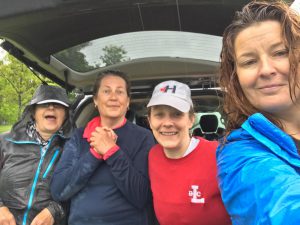